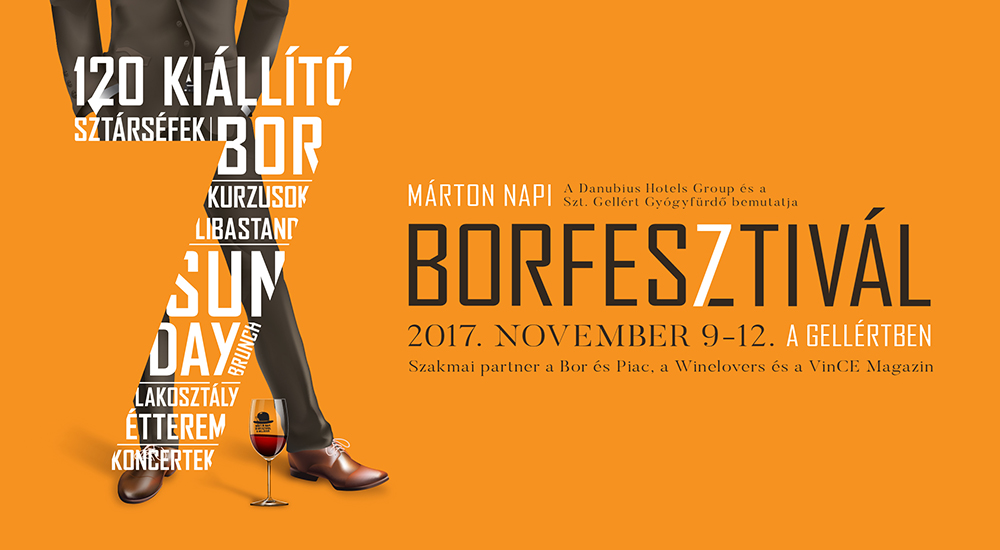 Tamás Széll – the most well known gastro hero in Hungary, who proved to the world that Hungarian chefs are also artists of the “Culinarium” – will introduce the mysteries of fine dining at the Martin Day Wine Festival of Danubius Hotel, accompanied by the golden trio of the chefs from Gerbeaud, Gundel and Gellért, with plenty of wine and foaming beer, posing a drinking challenge to everyone. All that between November 9 and12.

The most exciting Martin Day program of Budapest grew 7 years old, following different thematic on each occasion and resulting in sold out event in the recent years. Interest shown is already huge, and there is guessing as to how Hotel Gellért makes unforgettable the day of eating and new wine, commemorating the legend of St. Gerardus hiding in a goose-pen. Looking at the assortment, it soon becomes evident that the hotel housing the not-to-be-missed wine festival transforms into a gigantic „stuffed goose” with the best foods and wines serving as filling, accompanied by star chefs and wineries attending and featuring cool concerts. In addition, the 7th festival will be focused around the magic number of 7.

The wine festival will be launched with beer

Nowhere else in the world is there a Martin Day Wine Festival where beer is also assigned a significant role. Gellért is also exceptional in this regard, as on Day 0 7 master beer makers – representing the best Hungarian breweries – introduce their more than 30 drinks, in the frame of unlimited beer tasting. Accompanying beer snacks will be presented by Ádám Előházi – who despite his young age is the chef of the First Brewery of Balatonfüred boasting with a great professional carrier – and András Frideczky, creative chef of the recently renewed brasserie of Hotel Gellért.

Gellért also consents to the saying: wine can follow beer. For Friday and Saturday more than 100 of the best Hungarian wine makers were invited, the first day features the selection of Wine and Market, while the other introduces the Winelovers selection. The very best Hungarian wineries will be represented, none should be picked individually but all tested as one can bear – obviously following the rules of responsible alcohol consumption though. The make the challenge even bigger, this year for the first time the free of charge Wine College also introduces Pop-up Schools at the Martin Day Wine Festival, one can sip on the wines offered by DiVino during the concerts of Balkán Fanatik and Mary PopKids, while the best pálinka houses will also be featured at the wine festival.

The 7 wonders of gastronomy

This is what Gellért offers in the field of culinary delights. The hotel introduced and perfected the term Suite Restaurant, housed by the hotel’s suite having hosted the most well-known guests staying there, offering a magnificent view on river Danube. Both on Friday and Saturday participants will be charmed by the 7 course menu created by master chefs Szabina Szulló and Tamás Széll. They do not need to be introduced, their professional credentials are verified with a Michelin star, and Tamás Széll with his team was awarded the noble fourth position at the international Bocuse d’Or competition. Who needs more than that?

It is not over yet, as the golden trio of the Gerbeaud-Gundel-Gellért chefs at an unprecedented gastro summit present a wine dinner unique in the history of Hungarian gastronomy, with the head sommeliers of Onyx and Gundel selecting wines matching the courses. The list of stars: Ágnes Tóth and Gábor Merczi executive chefs, János Gervai sommelier and oenologist, as well as Mihály Fabók, three times Hungarian sommelier champion.

Flavors from countries behind and beyond

On the closing day, on the occasion of the Martin Day Sunday brunch László Héjja, chef of Gellért welcomes guests with a flavor globe trotting trip. Visitors at the all-you-can-eat Sunday brunch can taste goose and other dishes  from Hungary, USA, Norway, Denmark, Russia, China, Egypt, Italy, France, Israel and India. The rich assortment features Hungarian goose delights from region Bugac, as well as  Swabian goose leg, cholent from Israel and goose breast from Provence.